Today’s Dev Diaries entry focuses on the origin of the Additional Security Protocols. It is brought to you by Anna, one of the masterminds behind our game mechanics, and the person who has been in the EFS19 team the longest (not including the founder himself).

“The original idea for the Protocols dates back to 2017 or 2018. At that time, we were reviewing the beta test results, and thinking about how to improve our game. As you know, we were still a few years from the release of Escape from Site 19, but even then, much of our work was refining and readjusting the mechanics and difficulty levels based on our testers’ feedback.

So how does this tie in with the creation of the Protocols?

The original idea we came up with was the “Containment Breach” and the goal was simple – to make the game even more difficult. We were aiming to create a few extra cards, which would be shuffled into the Safe, Euclid, and Keter decks. These cards would be indistinguishable from the others, however they wouldn’t contain a normal task. Instead, there would be a series of options, ranging from a rule mildly terrorizing the card owner to a rule severely terrorizing the whole team.

As you can see if you already own Escape from Site 19, the idea did work out and there are Containment Breach cards included in the base game. But why mention them here?

Because they were the starting point for our development of the Protocols.

While working on the Containment Breach cards, we were constantly thinking, “Alright, this is very cool, but how can we do it better? How can we make the game more difficult while also introducing new story elements?” This was when we began to discuss the Protocols. At this stage, the idea was unrefined, untested, and had more plot holes than an average soap opera. Therefore, after trying to improve and balance our concept – and failing spectacularly – the team decided to focus on getting the base game ready for release. So the Protocols were put on the back burner while we worked on Escape from Site 19. But they were still on our mind, and we periodically came back to the idea, only to agree that we couldn’t realize it before the game’s release.

We revived the idea in 2021 when discussing plans for the upcoming year. The Dev team was still hung up on the idea of the Protocols, and so we began talking about what we would need to do to make this kind of card work. And a couple of brainstorming sessions later, the Protocols – as you will soon know them – were born. We came up with a story that would connect all of them together, so that they would make sense in the SCP universe, and we also brainstormed a new game mechanic, which would depend on the number of placed Lockdowns rather than a difficulty roll. In short, the more anomalies you fail to contain, the more challenging the Protocol will be.

Of course it wasn’t a painless process, and we had to cut many good stories that didn’t fit with the theme we were going for. But in the end, I believe we have created an exciting, balanced pack of Additional Security Measures, based on Protocols referenced in SCP articles. 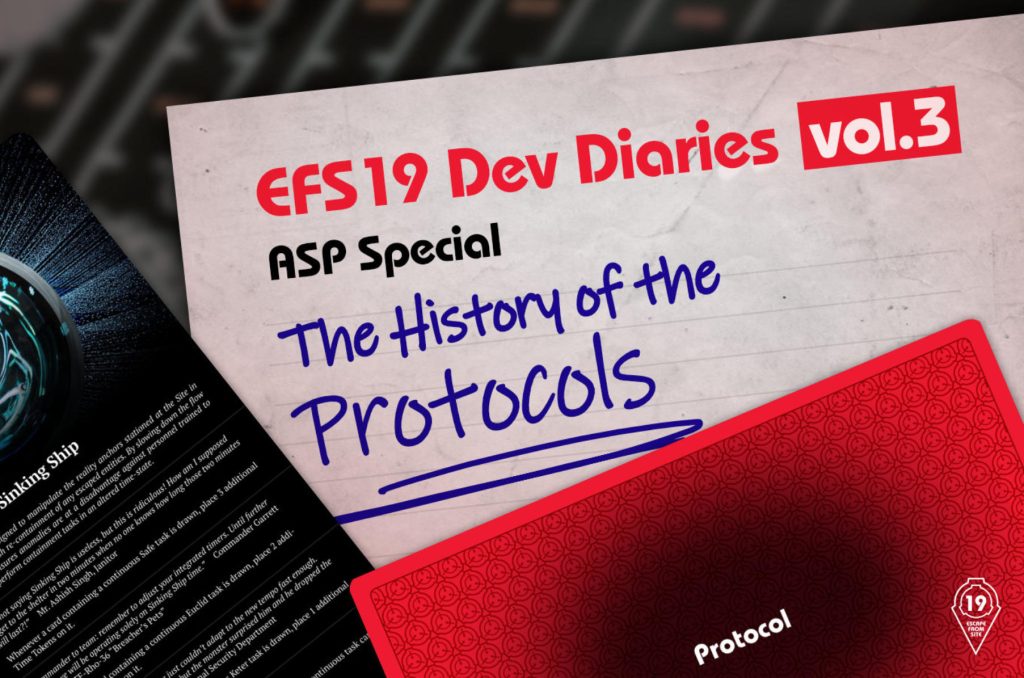